An article from The Geelong Times 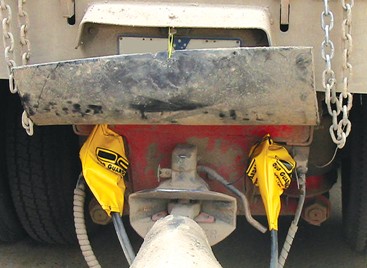 Local truck driver “Alexander”, who prefers to remain anonymous, knows a thing or two about keeping his 22-wheeler in spit-polished condition.

But it was the frustration of safeguarding complications which led him to devise a simple invention that could soon be used by truck drivers far and wide, and help reduce truck maintenance expenditure.

The first of its kind, Duo Guardable is essentially a shroud-sleeve made of heavy-duty UV-resistant material that protects and keeps tipper truck/trailer duomatic couplings, or anything that has air-supply couplings or hydraulic connections, like prime movers, farming, mining and earthmoving equipment, debris-free, thereby reducing damage and costs.

In particular Alexander says he found that unprotected connections and duomatics clogged with dirt and debris in normal circumstances, on average took up to 20 minutes to clean and uncouple. Plus on more than one occasion the dirt-clogged duomatic resulted in breakage of its release lever and rendered his truck immobile.

Cleaning the duomatic airbrake connection on his truck and trailer to ensure the connections sealed and functioned effectively, says Alexander, “became an increasingly frustrating exercise, especially when I had to unhitch the trailer”!

“The protective sleeve can even be left on when the trailer is unhitched from the truck.”

The invention simply slides over the male end of a duomatic or comparable coupling before the duomatic is connected. The sleeve is then fastened at both ends, thus ensuring the duomatic and connections remain dirt-free, making uncoupling hoses instant.

Alexander reports the Duo Guardable also helped prevent hoses from wear and cracking after testing the prototypes on his own truck/trailer combination for six months.

While the Australian-made product retails for under $100, Alexander says “the peace of mind it will provide truckies and truck owners will be invaluable, especially since we’re talking about saving thousands of dollars in time and money”.